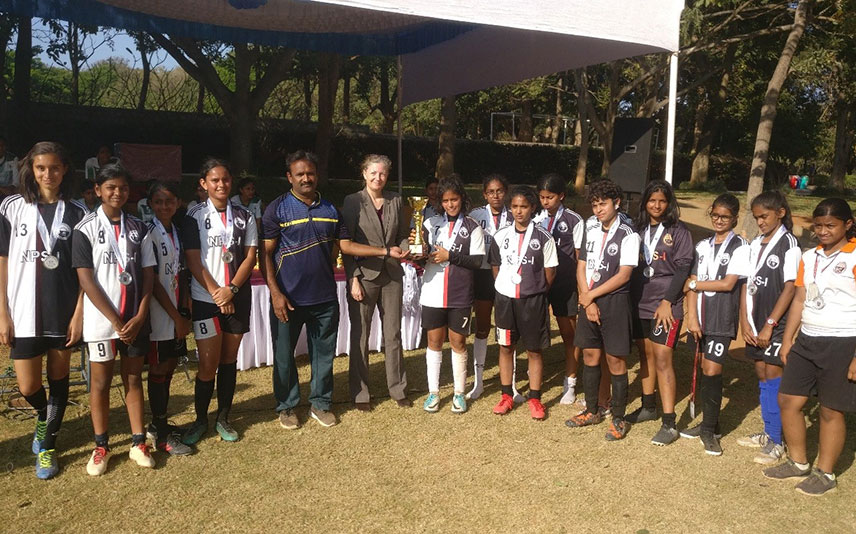 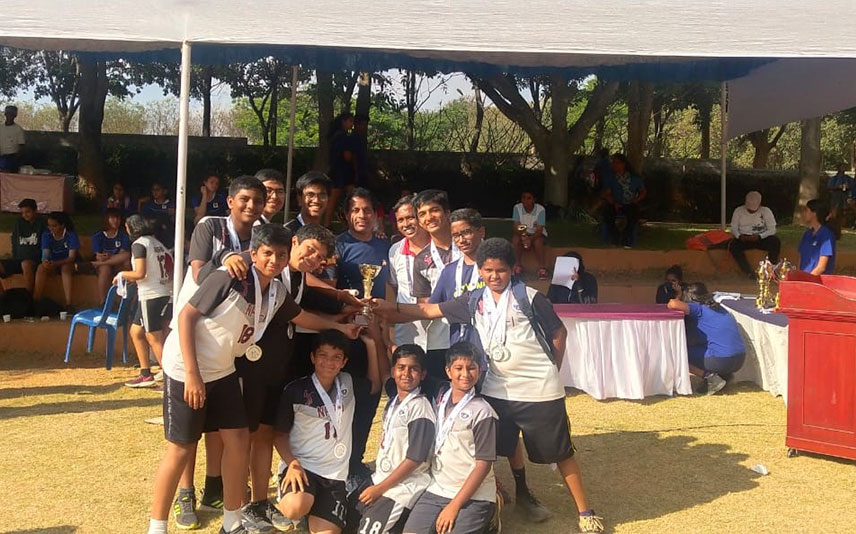 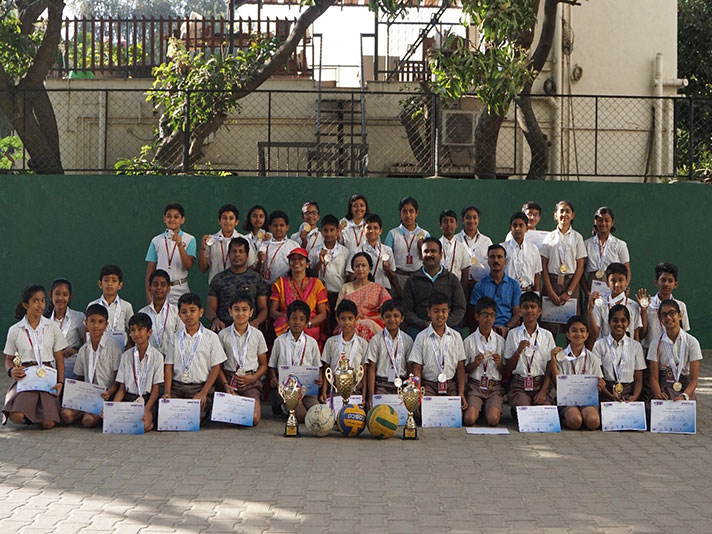 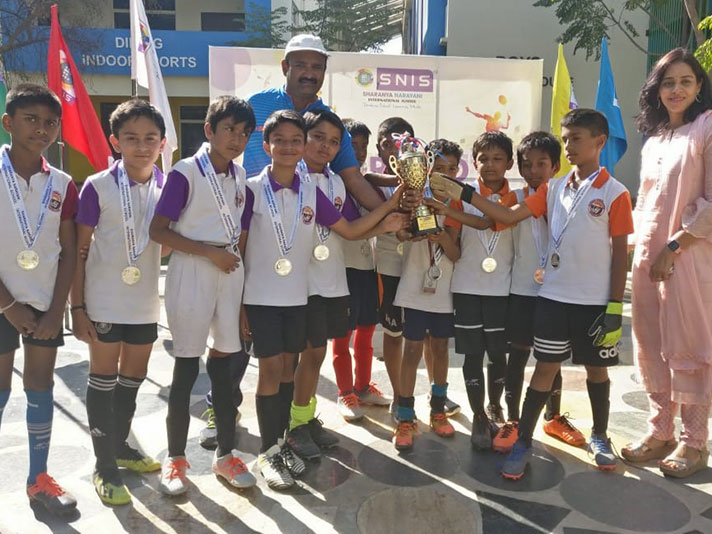 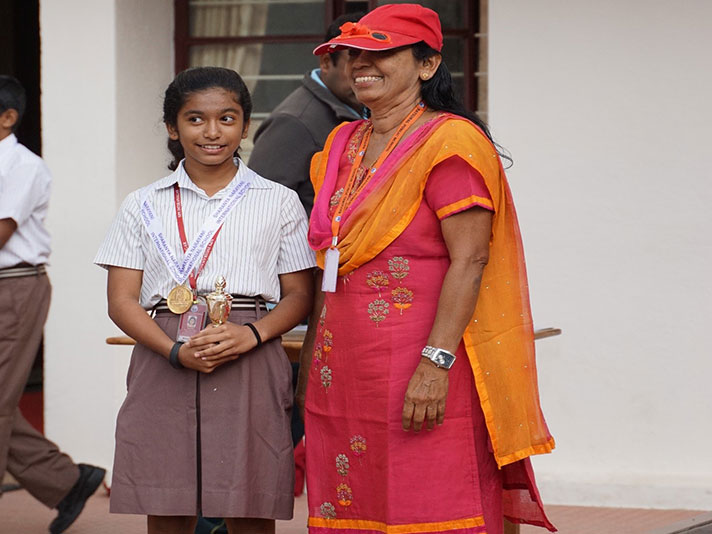 Ria Nayar class 6, Awarded the Most Promising Player of the tournament

Catherine Maria George of class 9 a born-footballer is an inspiration to footballers of her age category. She made the school proud by representing the school at the Girls Junior and Senior Karnataka State Level Competition in April 2019 and September 2019.

Samvar Harshil Shah of Class 6 took the Asset Talent Search test which is higher than the current grade level. As his score was in the 95th percentile, he was awarded the Asset Gold Scholar title. He also received a scholarship for the same. This score enables him to qualify for several gifted programs across the US. He has applied to and received acceptance from the Summer Institute for the Gifted at UC Berkeley. 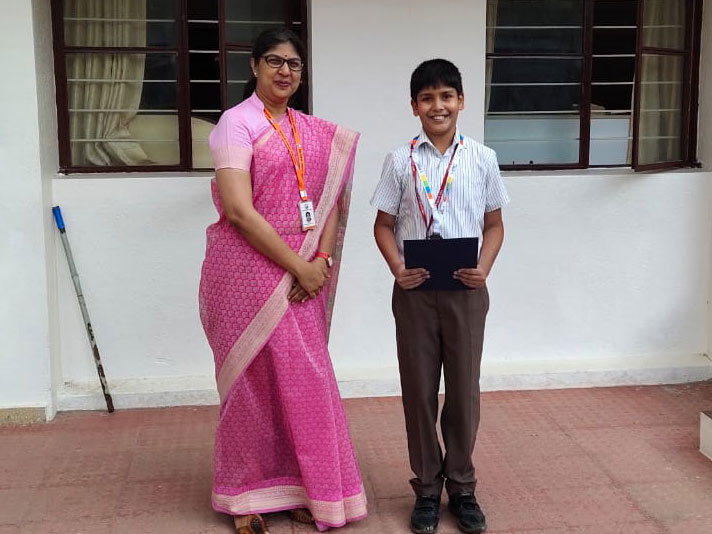 Aria Vikram of Class 10 was named Grand Prize Winner by Open Roberta for exceptional contributions to open source software as part of Google Code-in 2019. Google Code-in is a global online contest that encourages teenage students to use a range of skills, like coding, design, quality assurance, research, and outreach while contributing to open source software. Aria Vikram completed 48 tasks as Winner in the contest.

He has also won in below International Fide tournament in his age category in 2019:

He has reached the International FIDE rating of 1355. 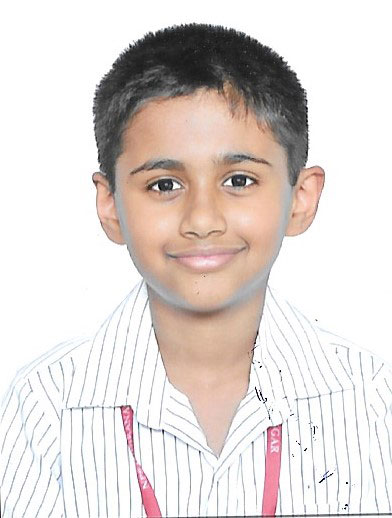 A hundred-odd coders from various colleges and companies and a team from NPS Indiranagar, gathered on Saturday, 18 January 2020 for a hackathon organised by Nasscom and Reverie Language Technologies. The hackathon’s agenda was breaking the language barrier through coding. Our team, comprising Anirudh S, Abhinav Chinta, Anand Balivada, Vrishab Krishna and Luv Singhal of Class 11, has developed a software called ‘Drishti’, that translates books in English or Hindi to books in braille of Indian languages, targeted towards publishers of braille books. Our team, which was also the youngest team at the event, won the hackathon and bagged prize money of Rs 1 lakh.

Drishti can be extended to any Indian language, as Bharati Braille (unlike Latin braille) is based on sounds or phonetics and not on the alphabet. The software has incorporated all sounds from many Indian languages. Every sound corresponds to the arrangement of dots. Braille was chosen as it was one of the neglected written forms of language in the country.

Senior Girls Football team of NPS, Indiranagar are the proud winners of “Junior Christ Football Tournament 2019”. They won the Tournament for the third time consecutively in 2017, 2018, 2019. Hats off to the “HATRICK WINNERS”. 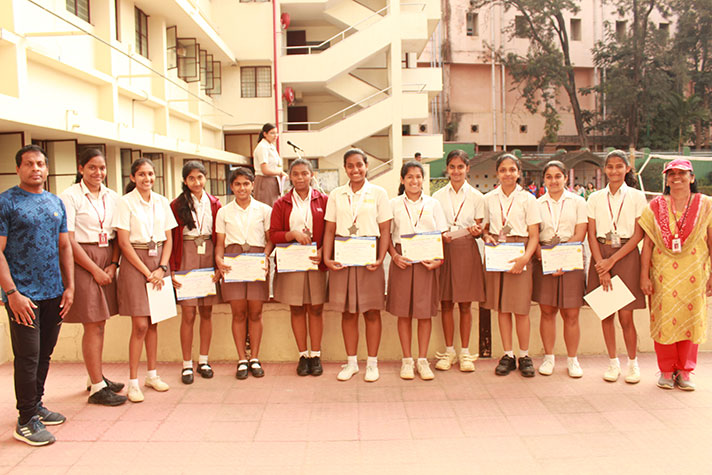 Runners Up (Badminton) - In the CBSE South Zone-II 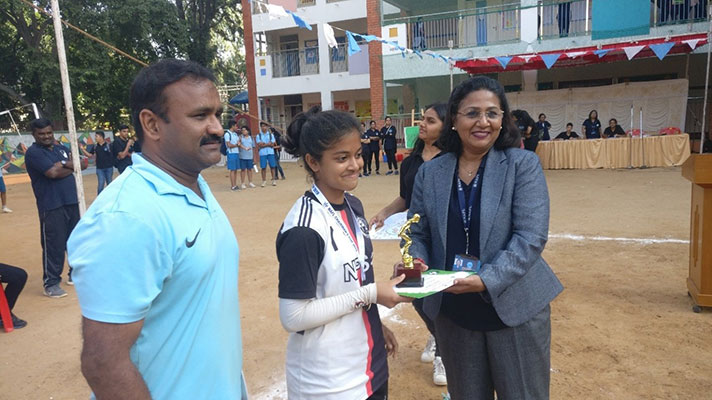 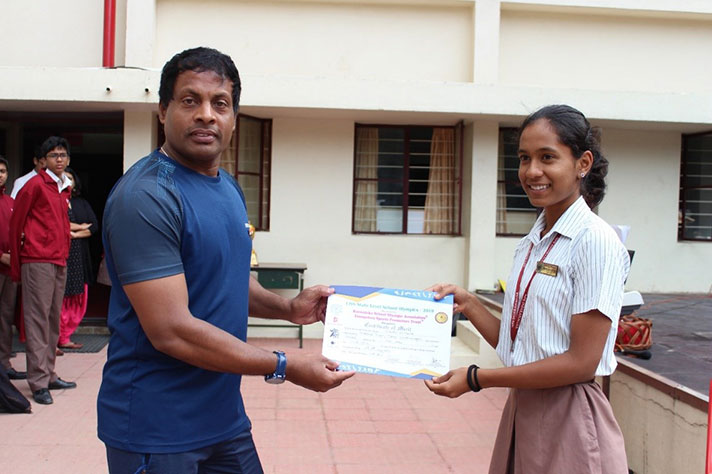 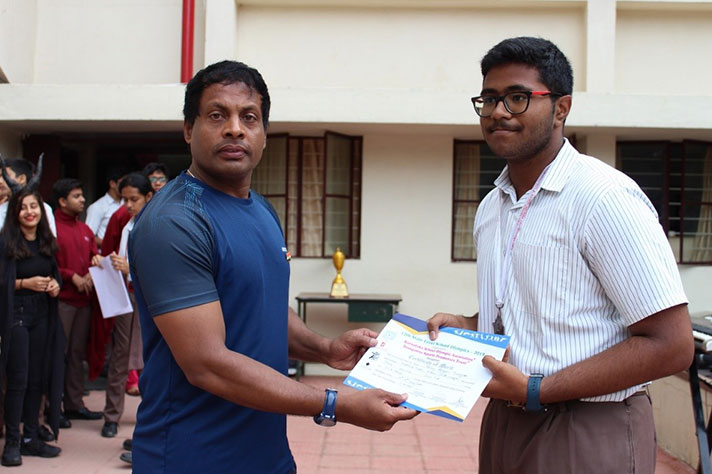 Nandita Kadkol emerges among the top 30 debaters of the country!

The Indian Schools Debating Society (ISDS) held its national debating camp in Chennai between the 20th and 24th of December 2019.

After a series of online quizzes that tested logic, economics, science, knowledge of current affairs as well as video selections in which participants had to upload a video of them speaking on a debate motion, Nandita Kadkol of class 10 was selected as one of the top 54 debaters of the country to attend the world schools debate training camp.

This prestigious camp itself had a range of activities, quizzes and workshops and numerous debates on topics like climate change and feminism. After 5 days of intensive debating and coaching from internationally acclaimed debaters, Nandita emerged among the top 30 debaters of the country!

Dubai Sports Council and JAM Sports Academy organized had organized their 6th United International Games in association with Sanyukta Bharatiya Khel Foundation from 8 November 2019 to 10 November 2019 in Dubai. Two of our students, Kaustubh Kulkarni and Smaran Dhyan Maletira of Class 8 represented India in U -17 Boys Category and made headlines securing a Bronze Medal. 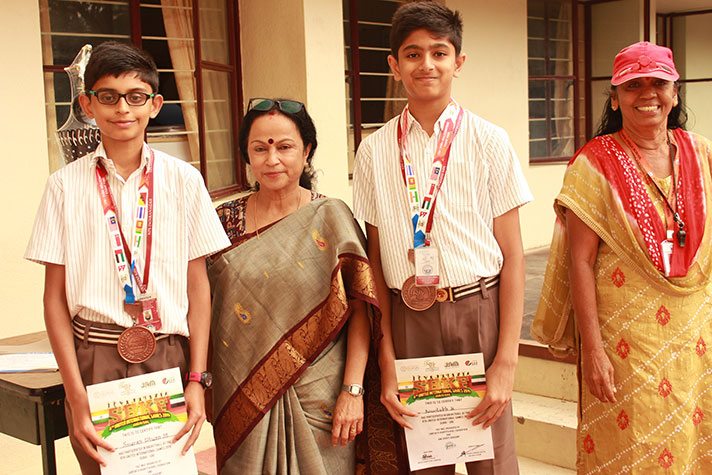 Aria Vikram of Class 10 became a global finalist in the Breakthrough Junior Challenge - a global science competition where participants have to explain a complex math or science topic in an engaging way.

Aria’s video was based on the telomeres - the caps at the end of our chromosomes which are major predictors of lifespan.

The competition received more than 3,200 submissions from 122 countries out of which Aria’s video was chosen in the top 15 by a judging panel which included Sal Khan(founder of Khanacademy), Lucy Hawking, Scott Kelly and Terence Tao.

The hackathon saw participation from 700 teams from all across Karnataka with competition spread over three tough rounds. First, an online aptitude test was conducted to screen out the best 200 teams. These teams then had to submit the synopsis of digital solutions for improving road safety in India. The top 50 teams thus selected were then invited to the final round which was a hackathon held at RV College of Engineering, Bangalore.

The NPS team idea was to develop a smartphone application (called DriveSafe) which uses inbuilt sensors in the smartphone to monitor reckless driving behaviours such as sudden braking, sharp turns etc. DriveSafe was selected amongst the top 10 ideas at the hackathon after a gruelling 24-hour development session at the RV College campus. Team NPS then made a final presentation to a panel of judges, which included auto-industry experts, deputy commissioner of traffic police and other eminent policy-makers.

For bagging the top prize at the hackathon, NPS Indiranagar will receive a cheque of Rs. 25,000 from the organisers of the event. Team NPS will also be receiving incubation support from Toyota if they wish to commercialise DriveSafe in an endeavour to make Indian roads safer for all of us. Siddhant and Shreyas are grateful for this very interesting learning experience and look forward to representing NPS Indiranagar at more such events.

Kaushik Sridhar of Class 12 won the annual Mridangam Competition under the senior category (above 17), conducted by the Rasika Ranjana Sabha - Trichy in the month of June 2019. The award presentation was done in August 2019 by the veteran Clarinet vidwan SangeetaKalanidhi Sri A. K. Natarajan

Kaushik also won the prestigious annual Mridangam Competition in the Junior category (below 18), conducted by the The Music Academy - Chennai in the month of September 2019. 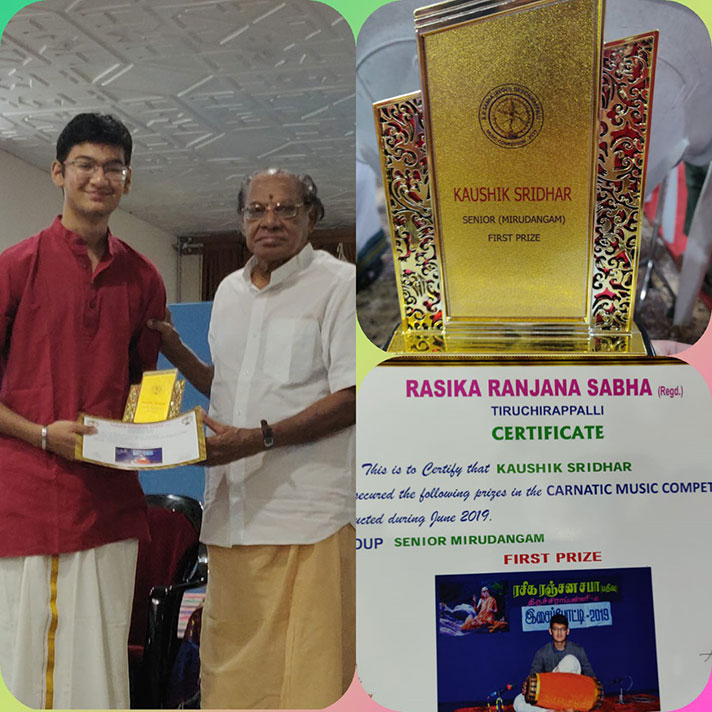 Shivani won by defeating Boxer from Army School, Maharashtra in the finals.

Shivani is now qualified for the CBSE National Boxing Championship to be held in Haryana.

Param Nayar and Ashvin Raghavan of Grade X participated in the World Water Summit, held on 21-23 August 2019, New Delhi. They did our school proud by winning the ‘Best Paper’ Award for their case study presentation on "Water Security for Growth and Development". They received the award from Mr. Anil Razdan, Former Secretary Power, Government of India & Chairman, Energy And Environment Foundation. The theme of the summit was “Clean and safe drinking water for all". The initiative brought together experts, professionals, students, and policy makers to find solutions to water challenges across the world.

The paper showcased two case studies of multi-storeyed apartments in Bangalore. The case studies provided evidence on the scale of the water challenge, the economic benefits from investments and explored a range of water stewardship actions towards water security. This included rain water recharge pits next to bore wells, reuse of water from sewage treatment plants, and individual water meter for apartments.

The paper addressed the following questions:

This paper highlighted the importance of seeing water as a cross cutting issue which can act as a catalyst for social, economic and environmental prosperity.